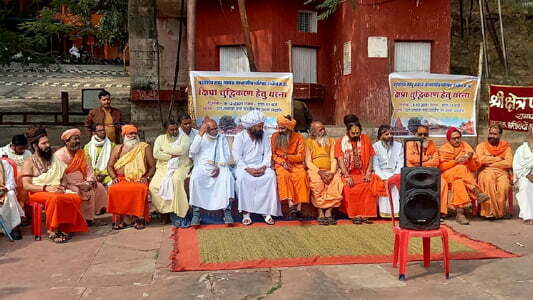 Ujjain. Even after spending crores of rupees, the water of the drains of Indore, Dewas and Ujjain is not stopping in Shipra river. Even after the ban, the sale of inedible material continues in the religious city. Angered by this, the Sant Samaj has started the movement. In this sequence, the saints sat on a fast at the Datta Akhara Ghat on the banks of the Shipra river and said that they would fight on every front for the sanctity of Shipra and the city.

To make Mokshadayini Maa Shipra clean, clean and pollution free and to maintain the sanctity of the city, the Sant Samaj of Ujjain started a phased movement on Thursday by performing a fast at Datta Akhara Ghat. It has been supported by all the social, religious organizations of Ujjain.

According to Mahant Dr. Rameshwardas of Shatdarshan Sadhu Samaj Divisional Parishad Ujjain, it was decided to launch a phased movement with the aim of implementing a concrete action plan regarding the sanctity of Shipra and the city. In this sequence, a sit-in demonstration has been started at Dutt Akhara Ghat from Thursday. In this, the meeting related to all the major 13 Akharas, monasteries, mahants of temples and saints will stage a sit-in here.

this is the demand

No contaminated water sources were found in the Shipra river from Triveni to Kaliadeh Mahal.

Contaminated water of all the drains of the city should be prevented from mixing in Shipra so that Shipra water can be used for drinking and bathing.

To maintain the sanctity of the city, consumption and sale of other prohibited items should be stopped. ,